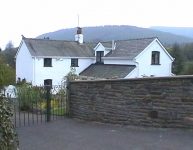 Lease number 1039 between the Earl of Bergavenny and Edward Lewis is dated 1699 for a messuage and parcels of land called Green y Croft and Wayne Vach.

Green y Croft was then leased to David Thomas from the Hon. George Neville.

Living there in 1737 was yeoman Roger Reynolds, Roger was also an overseer of the poor for the parish of Goytrey the same year.

Thirteen years later Roger Reynold is mentioned again when he takes the lease number 1012 in his name, the description on the lease says a cottage and 3 parcels of land, Green y Croft and Wain Vach at Cross-hoped.

In 1751 the parish records says, Mary, the wife of Rosser Reynold died, Roger Reynold died a few years later in 1756, they were both buried in St Peter’s churchyard.

Roger Reynold left a will, written the year he died in which he leaves to his grand-daughter Margarett Williams  a field “called by ye name of Ton Glas,” situate and being in the parish of Goytrey, by estimate 2 covers, this is leased land,  Margarett  to pay the rent and heriot, 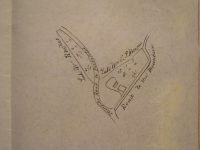 should she die then it is left to Roger’s daughter Margarett on the same conditions.

To Mary (I assume his daughter) he leaves a house on lease called Glan-y-nant, excluding the land called Ton Glas, should she die then the property is left to daughter’s Martha and Elizabeth to share on the same terms.

Also to the above he leaves the appurtenances called Pen Cross Hopped, situated in ye parish of Goytre to be enjoyed by them during the term of the lease.

In 1763 Roger Reynold’s daughter Elizabeth married William Absolom of Llantarnam. They were living at Green y Croft but did not take the lease until 1768 when William is classed as a yeoman occupying a cottage and 3 parcels of land at Cross Hopped, the lease states for the lives of, William Absolom, 38, his wife Elizabeth, 36, and David Thomas of Mynyislwyn aged 2.

The land tax in 1808 is in the name of Elizabeth Absolom, so William must have died but I cannot find a burial for him.

Elizabeth died in 1817 at Glan-y-nant when she was 86 years old, she is buried at St Peter’s, she had made a will in 1815 in which she says she leaves everything to her nephew William Griffiths and Sarah his wife.

The new occupier in 1817 was Thomas and Margaret Lewis. Thomas was a labourer, their children are John, Thomas, Elizabeth, Mary Ann and Capel. On the 1821 Earl of Abergavenny’s parish survey William was paying 5s land tax.

In February 1832 Richard Pruett from Llanelly married Martha Hall in Aberstruth. Richard’s name first appeared in the parish overseers’ accounts in 1835 and again the same year when their daughter Mary was baptised.

In 1838 their daughter Elizabeth was also baptised at St Peter’s.

The census of 1841 says Richard Pruett is a 35 year old stonemason, Martha his wife is also 35.

Two more daughters were born to them, Sarah in 1846 and Martha in 1849. Unfortunately their 14 year old daughter Mary died in 1849 and was buried at St Peter’s.

The census of 1851 says Richard Pruett is 45 year old mason Martha is 46, they were both born in Llanelly, their children are Elizabeth 12, Sarah 4 and two year old Martha.

Richard built the Woodlands about 1855/6 for himself, this property is a very short distance from Green y Croft.

In 1857 Richard took the lease of Green y Croft for the lives of his children, Elizabeth 18, Sarah 10 and Martha 7. The same year he took the lease for The Wharf at a cost of £87 per annum.

Richard Pruett had let Green y Croft to Evan Jones in 1860 whilst Evan was there he voted for William Harris to become the parish surveyor of the highways but William Harris lost the vote.

Evan Jones had left Green y Croft by the 1861 census when it was occupied by David Morris and his family. David was 25, a woollen spinner (probably working at Gwenffrwd) his wife Mary was 21 and from St Mellons, they had a son, also called David who was born in Goytre.

By the census of 1871 63 year old John Jones is living at Green y Croft, he is a woollen spinner from Cardigan, his wife Elizabeth is 61 and their son Morgan is 31 who was born in Rhymney. 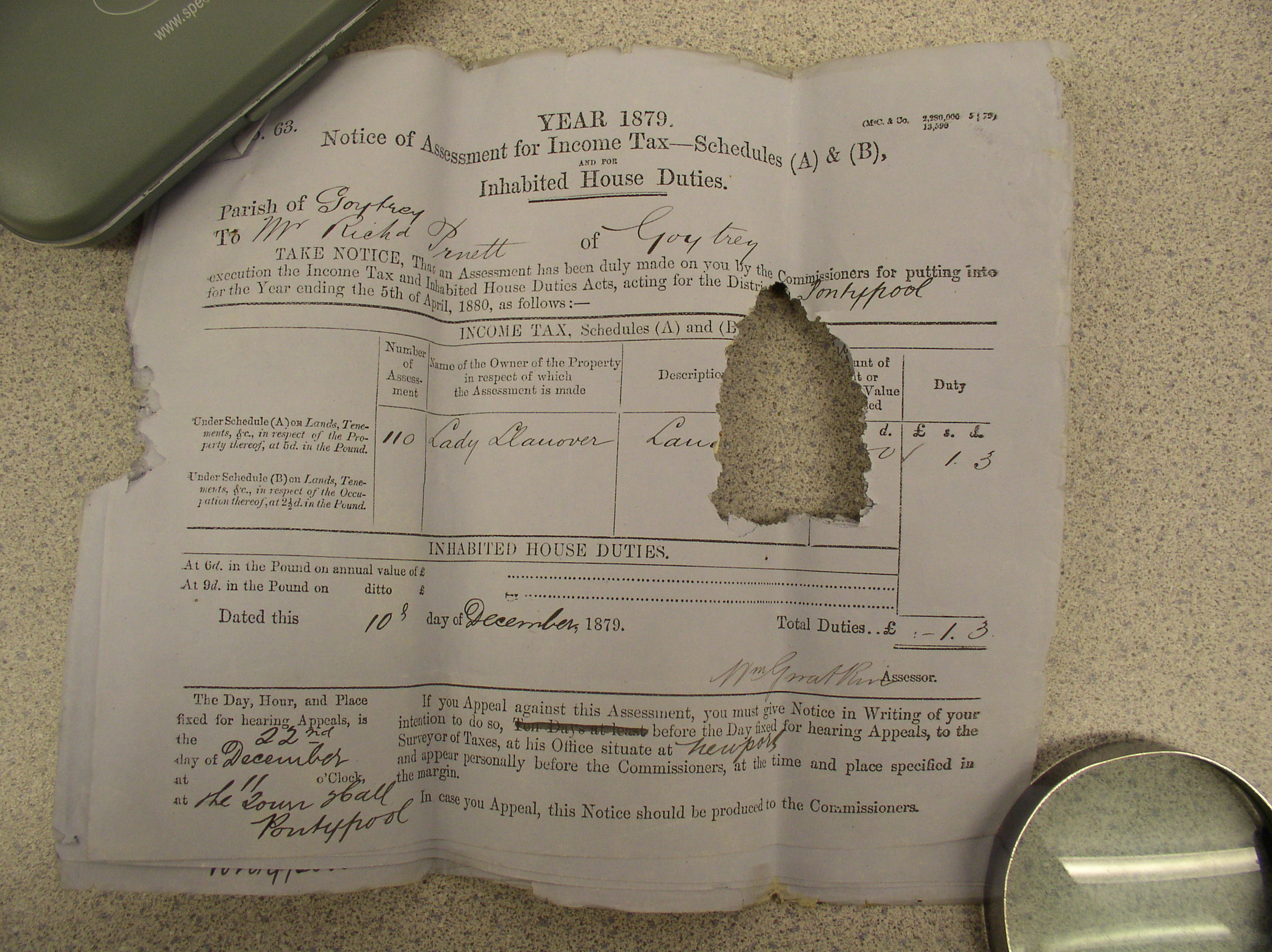 The Pruett daughters still held the lease in 1884, at this time Lady Llanover started to makes moves against them to release it to her.

The census of 1891 shows 46 year old jobbing gardener Thomas Jones and his family living at Greenfields, his wife Ruth is 49 from Monkswood, sons William 11 and John 9 were born in Hereford as was Thomas; the younger children, Christiana 4, Florence 2 and 7 month old Ethel were born in Goytre.

Thomas Jones and his family had moved to no. 2 Chapel Ed cottages by the 1901 census, they were replaced at Greenfields by Dorothy Evans, a 47 year old widow, she and all her family came from Carmarthenshire, daughter Dorothy, 27, Edward 23, a plumber, 18 year old Thomas, a gardener, Jeanet 8 and 3 year old William.

The census of 1911 show two separate families at Greenfield Cottages, at number 1 is Gwillim Evans, a 55 year old woollen spinner at the flannel factory living with his 57 year old wife Margaret, son David, a 29 year old farm labourer and 26 year old Gwillim a brewers labourer, all the family were born in Carmarthenshire.

At number 2 Greenfield is George Roberts, George is 82 year old, a retired general labourer who was born in Llantrissent.

I, William Richardson of the Estate Office, Eridge Green, Sussex Estate, clerk, do solemnly declare and sincerely declare as follows:-

On the 26th March 1918 Mary Lewis, the daughter of Daniel Lewis of the Woodlands apply on behalf of her father to purchase Greenfield Cottages from the Earl of Abergavenny, 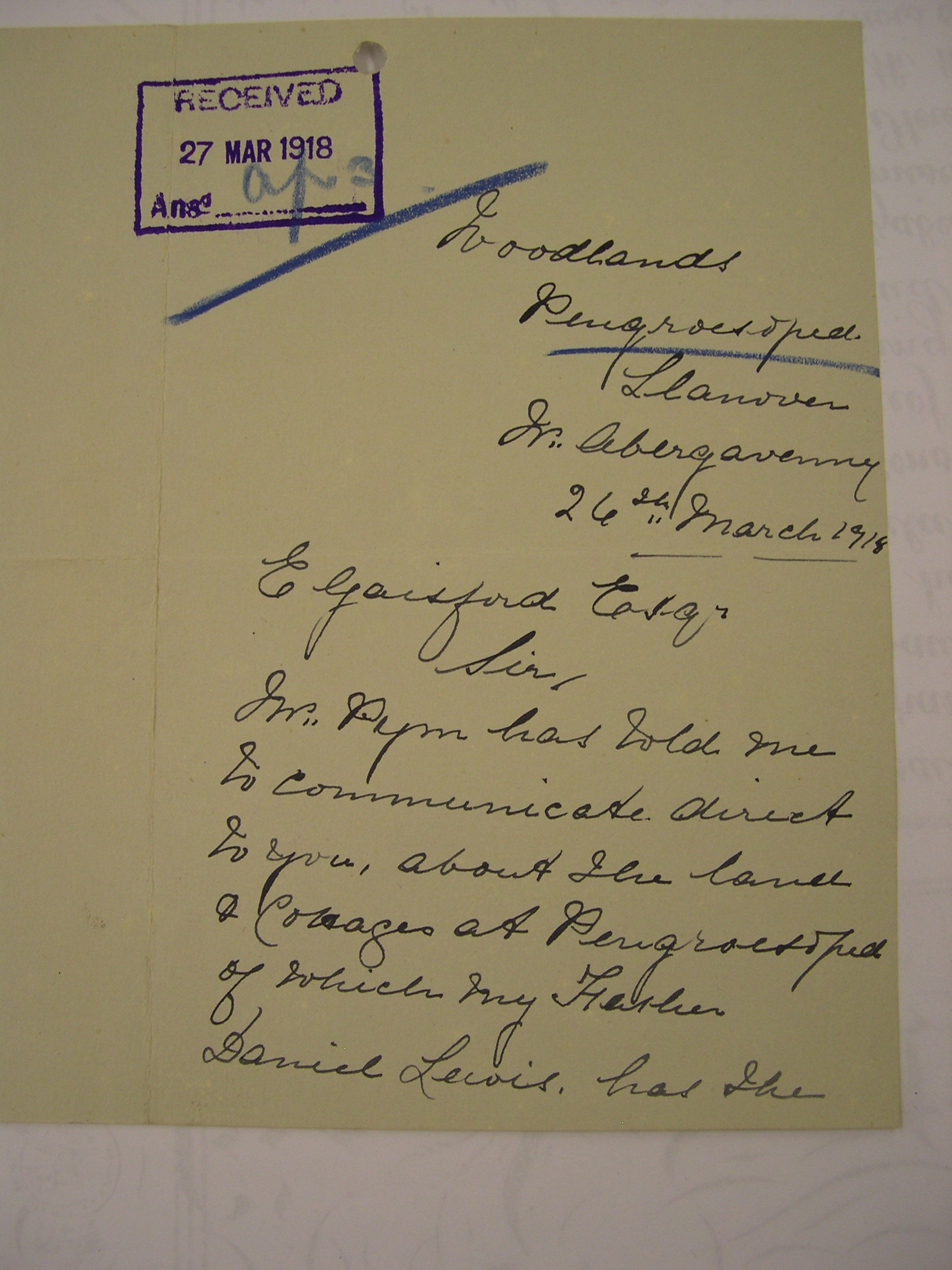 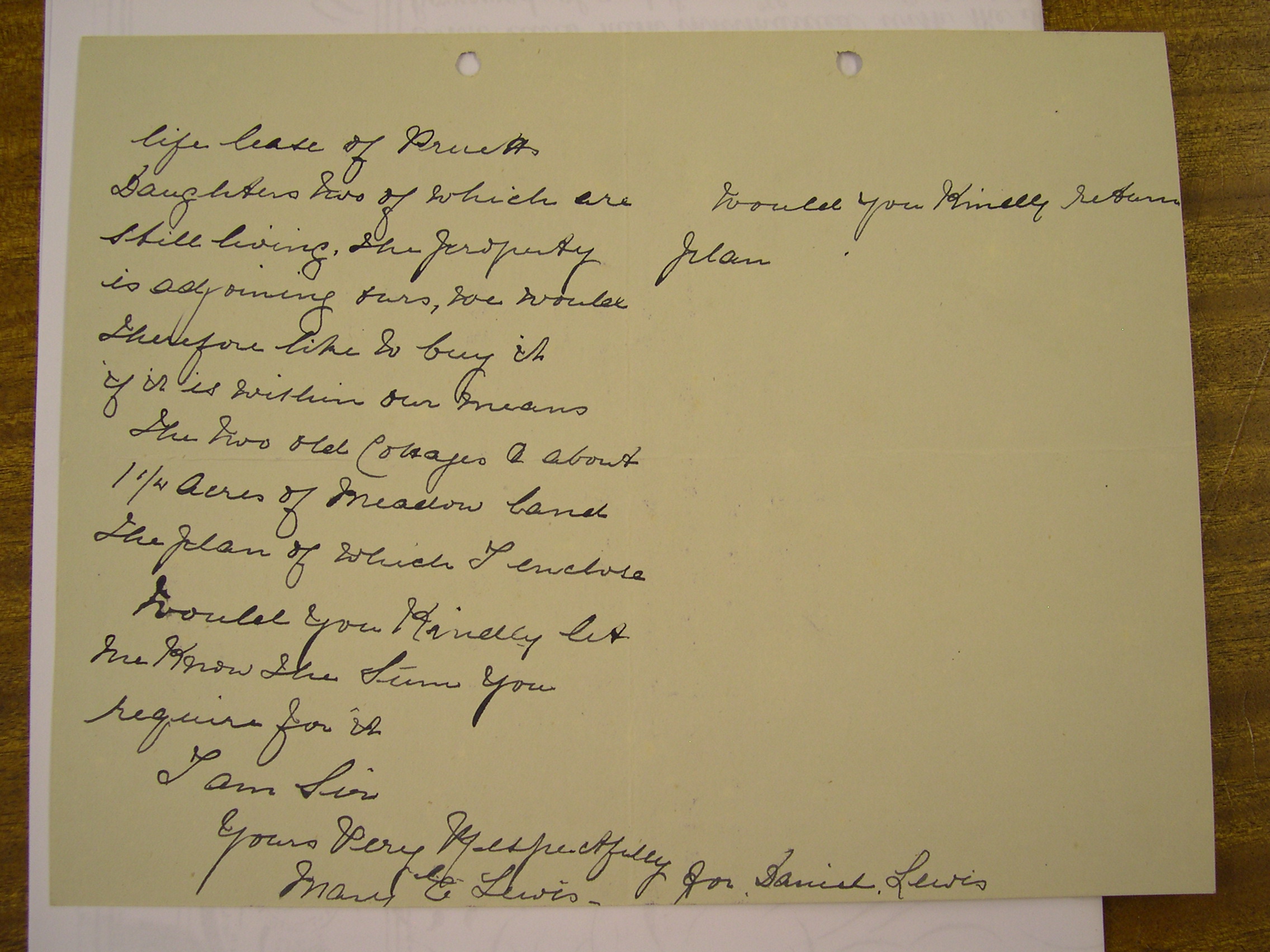 Mary Lewis mentions that two of Pruett’s daughters are still living, she also refers to Greenfield as the “two old cottages and 11/4 acres” that adjoins ours.

The property was sold to Lady Llanover’s trustees in 1918.